The best places to stay in Saint-Paul-de-Vence

Perched on a hill, Saint Paul de Vence is one of the oldest perfectly preserved medieval towns on the French Riviera. It is particularly remarkable as a haven of peace for artists since the beginning of the 20th century. The best places to stay in Saint Paul de Vence offer an idyllic retreat just seven kilometers from the beach and a few kilometers by car from the glamorous seaside resorts of Cannes and Nice.

Historically, Saint Paul was considered strategically important and became a border stronghold. The impressive 14th-century walls bear witness to this. In the 17th century, the beautiful church of Saint Paul was enlarged and the sumptuous Saint-Clement Chapel was built. Influential families built mansions in the city.

The opening of a tramway in 1911 transformed the city by allowing local farmers to export their products to Nice, Antibes, and Grasse and to make this beautiful place accessible to the outside world.

Artists discovered Saint Paul de Vence in the early 1920s. Raoul Dufy was one of the first to come here, attracted by light and color. The artistic community formed a center around the classic hotel La Colombe d’Or which is adorned with many of their works – Picasso and Chagall among the most famous. In the 1950s, the city became a popular film location.

Browse through our list of the best places to stay in Saint-Paul-de-Vence to start planning your stay.

Find a hotel in Saint-Paul-de-Vence

To sleep in Saint-Paul-de-Vence, you will find some options among more than 130 hotels.

Find a hotel in Saint-Paul-de-Vence 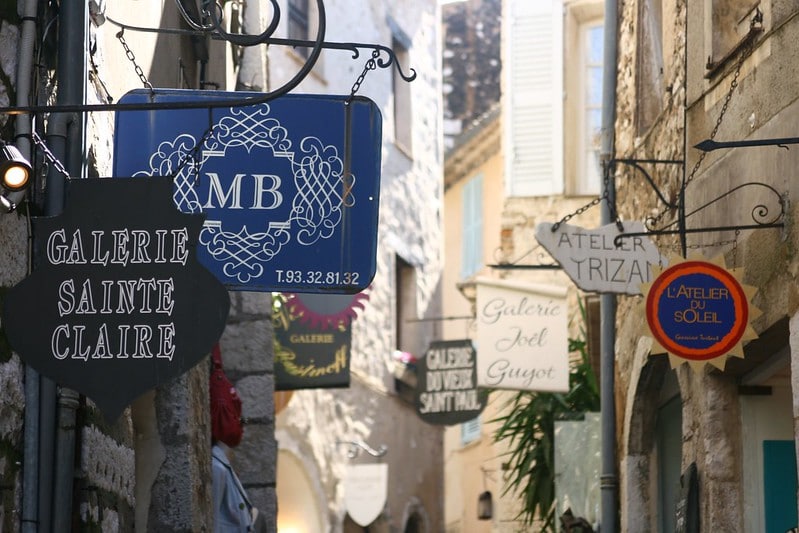 Vacation home for rent in Saint-Paul-de-Vence

In addition to hotels, you can rent a vacation home for your accommodation in Saint-Paul-de-Vence.

Find a vacation rental in Saint-Paul-de-Vence

Apartment for rent in Saint-Paul-de-Vence

You can also choose to rent an apartment in Saint-Paul-de-Vence.

Find an apartment for rent in Saint-Paul-de-Vence

Bed and Breakfast (B&B) in Saint-Paul-de-Vence

To live as close as possible to the premises, you can rent a Bed and Breakfast to sleep in Saint-Paul-de-Vence.

Find a guest house in Saint-Paul-de-Vence

The interactive map below shows the hotels to sleep in Saint-Paul-de-Vence. The rate for one night as well as the overall rating of the hotel is indicated directly on the map. Click on the icons on the map to view additional information about each hotel.